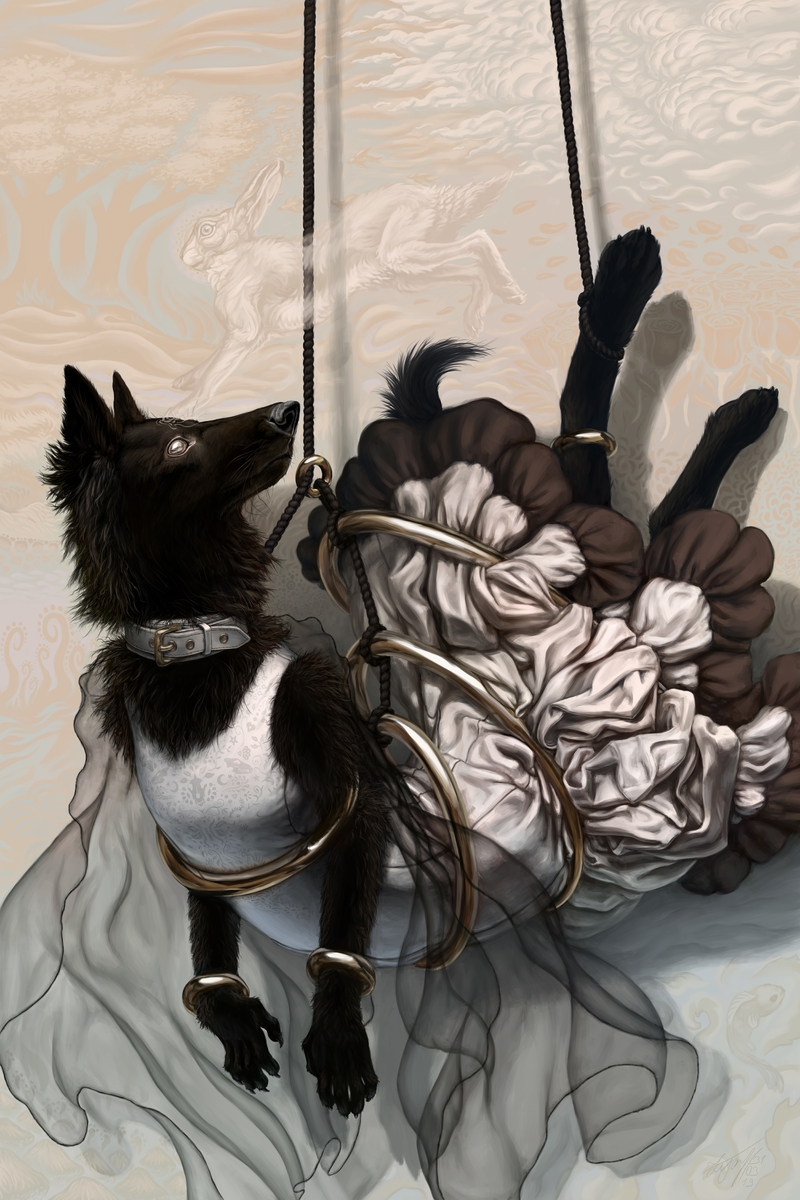 Sometimes you learn by being told what you already know.


The original goal for this painting was to explore what it means to be passionate about something.  I wanted to find the things I care about, which are not dependent on having other people react to what I do.  A painting made to my liking.  The method I used to create this scene was to look through the work of other artists, while noting everything my eyes lingered on, to then find as many concepts that bring me joy as I could.  The resulting image stands as a window into my mind.

At the center of this painting is the black dog contrasted by the white dress.  Brass hoops restrain the figure and a dark rope suspends them in the air.  The focus of this painting is the interaction of those elements and how, for example, the metal digs into the volume of the skirt fabric.  Everything else was deliberately made to be revealed only after closer inspection.  The hare’s foot is meant to call for such an investigation.  An intricate pattern fills the space surrounding the character and is printed on the chest of the dress; both showing diverse details without repetition.

Having many things in the painting be virtually invisible without being hidden from sight is an expression of the theme I set out to explore.  The things we like aren’t determined by exact rules, but every individual can still tell what they like.  We know it when we see it.  The knowledge of what we like is something that already exists, and yet we can learn more about it.  Sometimes you can learn how to describe what you like, even though you always knew that you liked that when you saw it.  That’s why I chose this title for this painting. 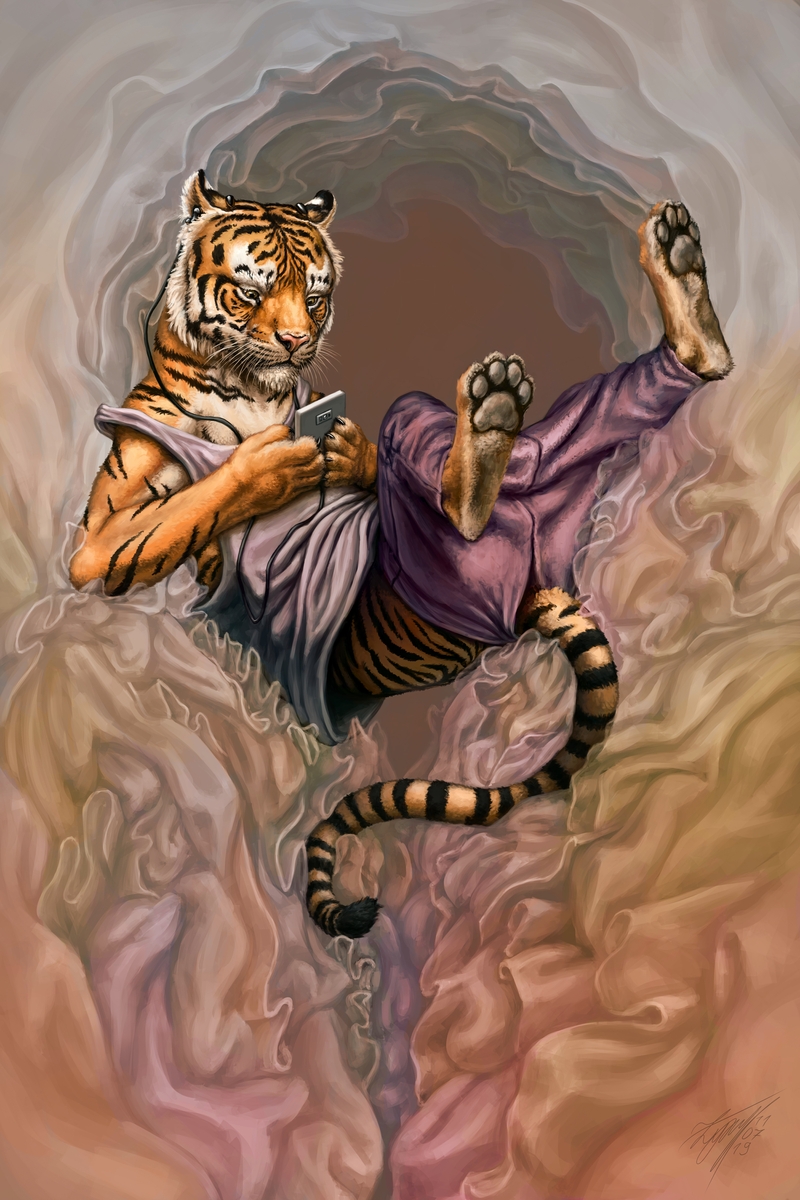 Hidden appreciation in a quiet love.


I started this painting a month after I finished the first version of the stag on the spoon.  My goal was to have a painting that would fit with the other stylistically, while also contrasting the behaviour of the characters.  The decision to make them a bengal tiger and a sambar deer was made when I was planning a series pairing apex predators and their respective prey to contrast different methods of interacting with the world, while the motive of a tiger preoccupied by a smartphone stems from an older painting I made in 2016.  The current painting was finished 2019-07-11 and contains several small improvements over the previous version from 2019-01-23.

The tiger in this painting visibly shows disinterest in his physical surroundings.  His eyes are focused on the phone alone and the headphones in his ears help to shut out the entire world.  His posture and clothes are aimed to reflect his loss of motivation to take action.  A disinterest in what others think about him.  In the space surrounding him is a mass of soft fabrics without a clear shape, touching him only lightly.

The way all his attention is focused inwards is intended to contrast with the way the stag challenges the opinions of people around him.  Both of them face the same struggles, but the tiger in his role as an apex predator presents a different method of coping.  He retreats from the physical world to just pursue what he desires without confronting others.  A tiger served as an ideal subject for this mindset, because his physical strength ensures that nobody dares to challenge him.  My aim was to convey the experience of clinging to the simulation of a life to satiate the longing for a different life. 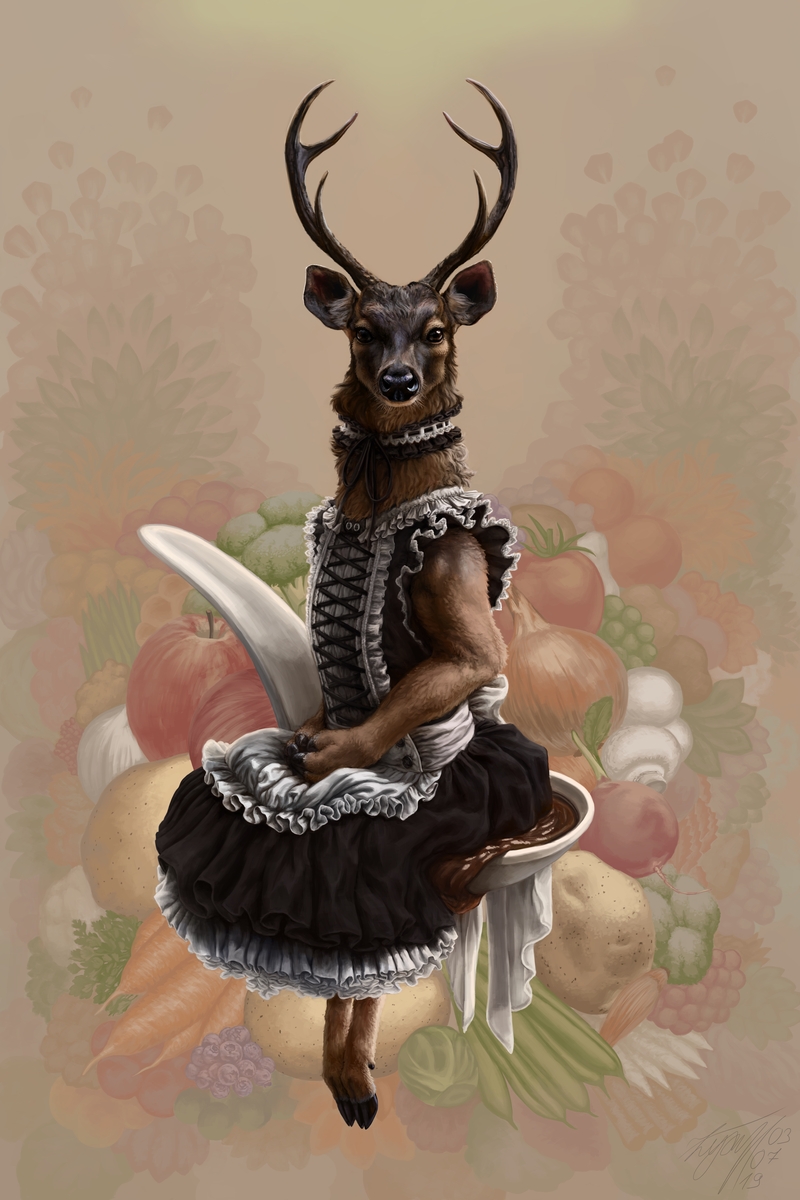 The first love of a tiger.


This painting is based on an idea I originally planned to realize as a series of oil paintings.  I wanted to paint this stag together with the tiger of my later painting, to contrast their different mindsets with each other.  While working out the details of the oil painting, I stumbled across the abstract paintings of René Magritte and felt compelled to create a more abstract piece too.  The original version was finished 2018-12-18 as a simple abstract painting and the current version was finished 2019-07-03 with about 60 hours spent painting it.

The deer in this painting is presented with distinctly masculine physical features while the posture and clothes convey a feminine character.  The type of presentation itself is aimed to resemble the advertisement of food.  This impression is supported by the assortment of vegetables in the background.  The stag himself is looking directly at the viewer with an alert expression and body language conveying composure.  I wanted it to be clear that he challenges you to assess him and that he isn’t afraid of your opinion.

This boldness is central to the character of this stag.  He represents the desire to find a way to be oneself in society.  It was important that he carries strong features of masculinity that allow him to dress feminine, without looking like a comedic dress up.  The antlers of a deer proved optimal for this purpose.  He defies cultural conventions without pushing against what’s permissible.  He presents the courage of shouldering all responsibility that comes with being yourself without compromise. 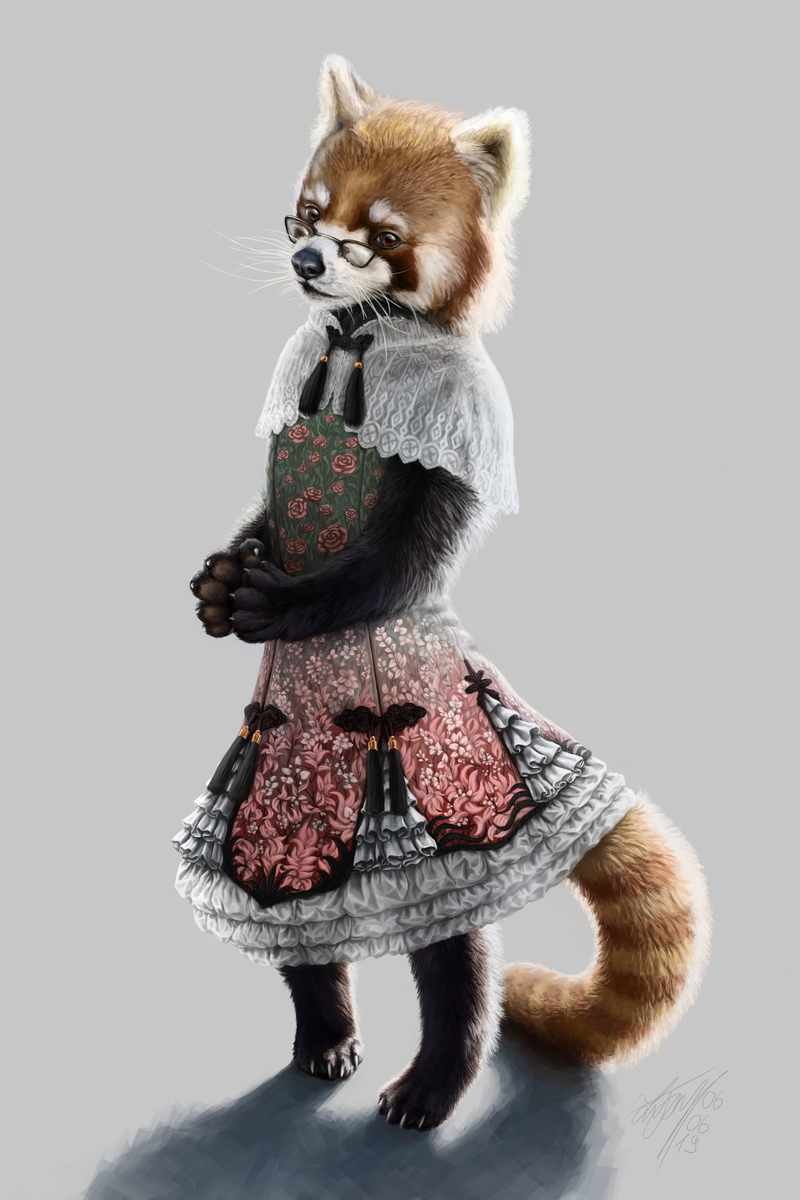 A great freedom lies in the ability to speak your truth.


This painting was originally made in an attempt to find a style that I could use to create something nice looking in a short time.  The motive of a red panda wearing a qi lolita dress seemed to be a good example for that style, because it resonated with what I like to paint in general.  Only after I finished it in 2018-12-02, I realized how much this painting revealed about myself, which then led me to spend some more time on it.  The current version was finished in 2019-06-06.

Another reason for why I chose to have a red panda wear a dress in this painting was because of my interest to see, if I could make that kind of clothing work with the anatomy of an animal and red pandas seemed a good option because they often stand on two legs, which means it’s easy to find good reference pictures.  The dress itself was based on designs I found compelling and was changed to fit the anatomy of the red panda naturally and have colors that complement it as well.

I enjoy the creation of designs like this, because I dislike how mass produced modern fashion has no consideration for individuals.  The clothes you wear let you communicate with the world, they let you tell others on sight, what kind of person you want to be and how you desire to partake in this world.  Clothes in fashion may just express the size of your budget.  That’s why I will keep painting animal characters wearing unique dresses designed just for them.  I hope it will make others long for a wardrobe that speaks for them too. 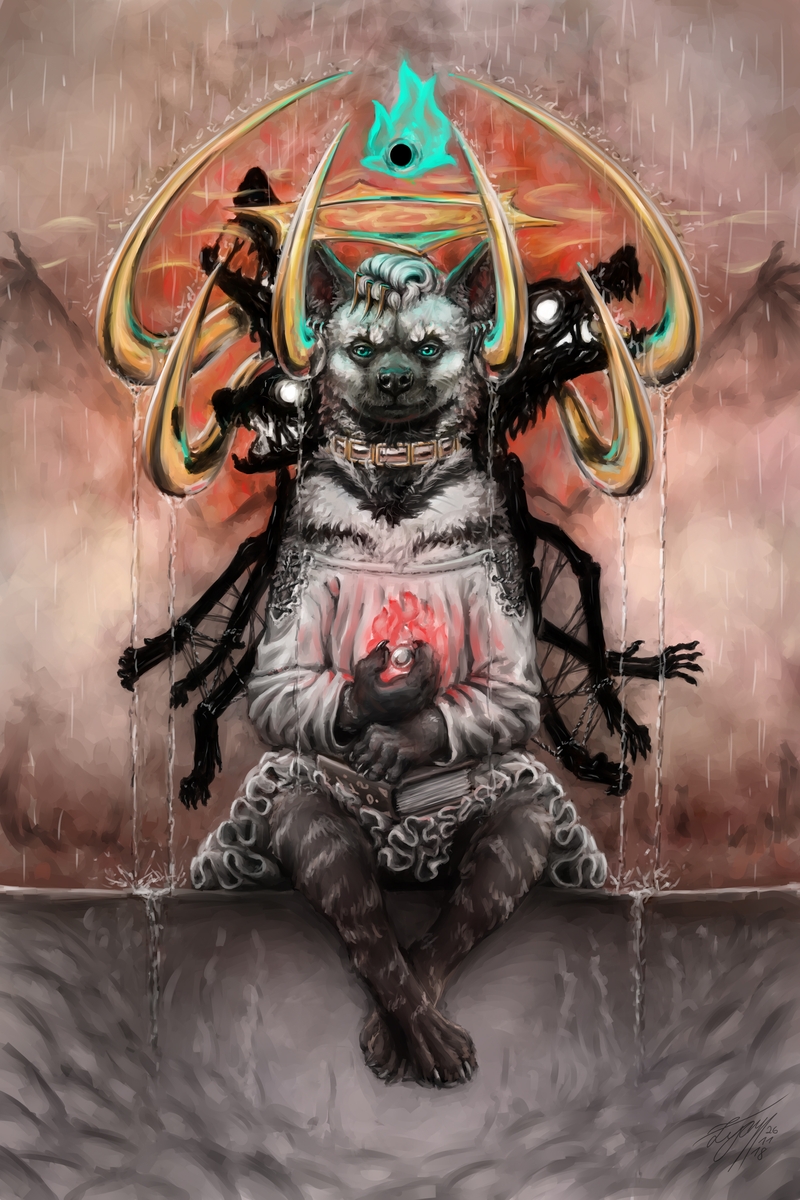 A good mind is able to embrace a monster.


I made this painting at a time when I wanted my paintings in general to reveal more about myself.  The motive was inspired by my dreams where I saw myself doing things I wouldn’t want to do in the real world.  It’s an exploration of the difference between what a person is capable of doing and what the same person is willing to do.

The most prominent feature of this painting are the shadowy creatures behind the hyena.  They’re meant to be a quiet bloodlust, restrained by a conscience.  All elements of the composition were created with this kind of duality in mind.  Even the shape of the whole scene is aimed to look like a white dove, that’s framed by darker rugged details.  The burning orbs are souls as I usually like to portray them.  One is floating above the head as the driving force of the mind caged by a golden halo.  The other rests in the hand as self determination.

This duality is aimed to present how I think that my nature should be incorporated into my personality.  Just like the title suggests, I think that even the most gruesome aspects don’t need to be banished.  The best possible outcome is when one is in control and doesn’t do what’s immoral, while still possessing the ability to become a monster when it’s really necessary.  In other words, don’t fight your subconscious, instead convince it to fight for you. 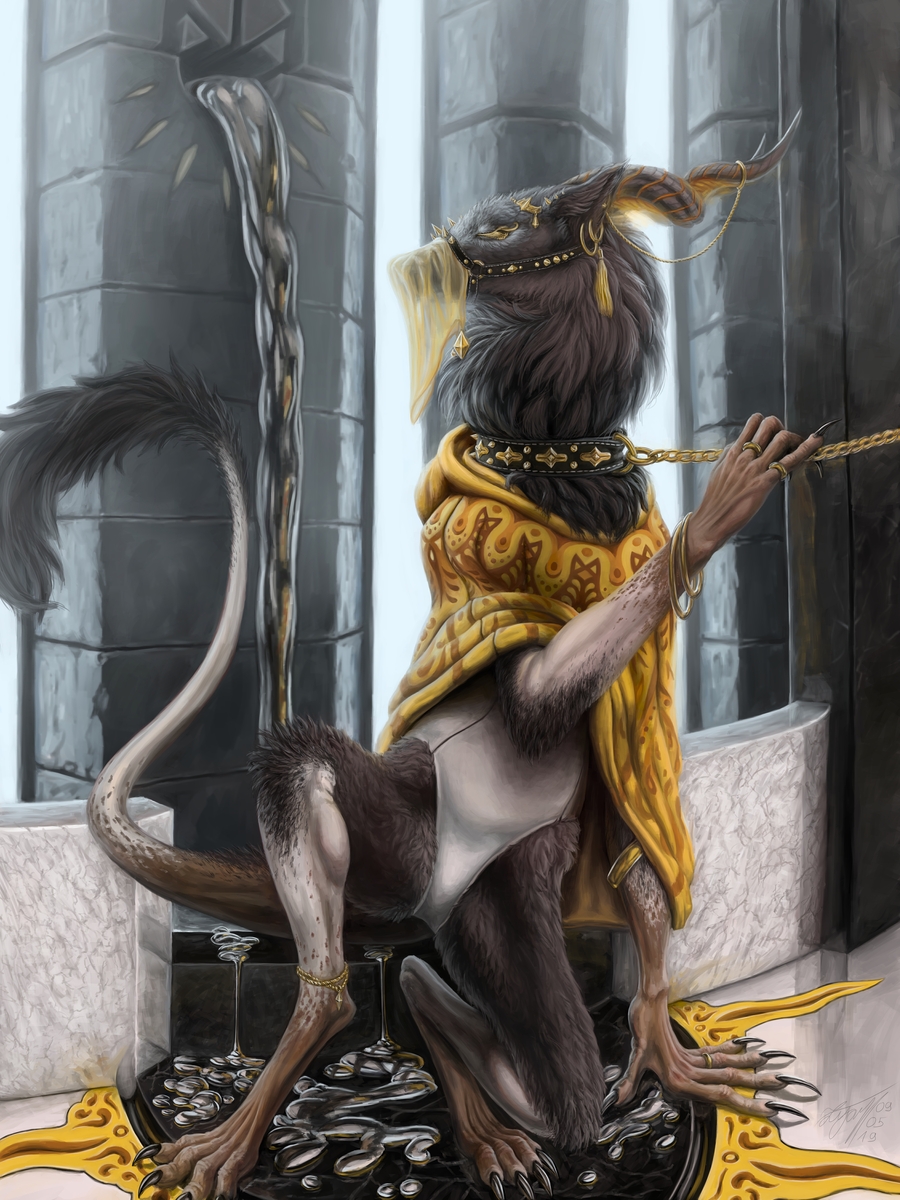 What I fear most is for others yet unseen.

For this scene I imagined a person partaking in an old ritual to become something supposedly beautiful and admirable.  To be adorned in jewelry and beautiful fabrics, but not looking conventionally pretty as you can see.  I found a deep desire to portray conflict between what someone wants themselves to be and what they choose to be out of a deep desire to aid others they love.

There’s strong contrast between the appearance of the hands and the face as symbols to emphasize the differences in action and perception.  A hand on the chain to show willingness to let outside forces be the guide, while the face is averted with the eyes closed to show a longing for something else.  This inner conflict is still something I want to show to more people.  I appreciate that you were willing to let me show it to you.